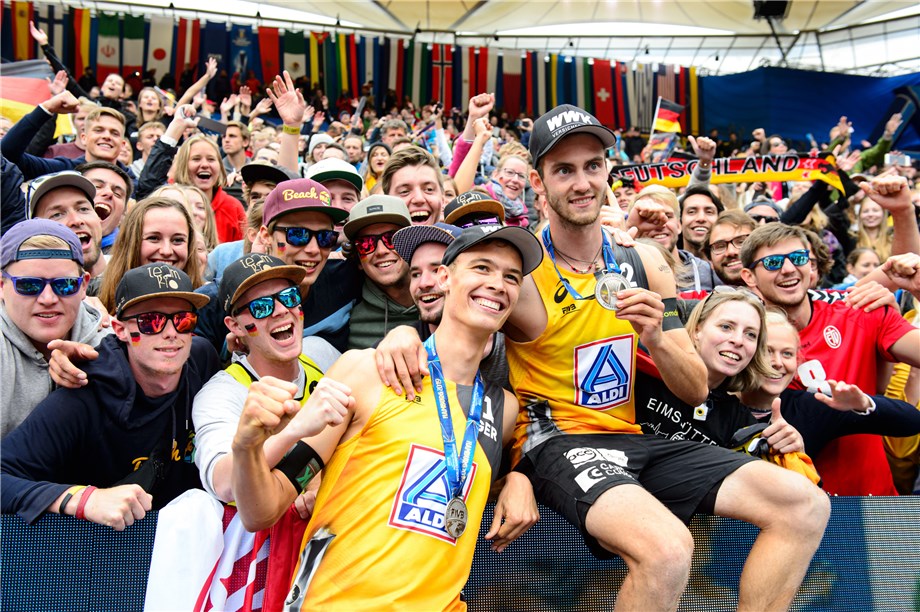 Lausanne, Switzerland, December 9, 2019 - The FIVB World Tour Beach Volleyball Awards are back and after voting by the top players and coaches on the international circuit it is time to announce which teams and players claim honours in 2018/2019. We start the big reveal with the Most Improved Men's Team of 2018/2019.

Most Improved Men's Team 2018/2019 - Julius Thole & Clemens Wickler (GER)
Julius Thole and Clemens Wickler will remember 2019 as the year in which they broke through to the top of the beach volleyball world.
The German pair had previously finished on the podium at one FIVB Beach Volleyball World Tour event when they won bronze at the Espinho 4-Star in 2018. It was a sign of things to come and Thole, 22, and Wickler, 24, began the year with another podium finish after winning silver at The Hague 4-Star.
They were unable to add anymore medals by the time the FIVB Beach Volleyball World Championships arrived in Hamburg in July but playing in front of packed crowds at home inspired the duo and they went all the way to the final. The final was a repeat of the gold medal match in The Hague and once again Viacheslav Krasilnikov and Oleg Stoyanovskiy had the better of them.
Wickler and Thole added bronze at the Moscow 4-Star, and when the FIVB Beach Volleyball World Tour Finals took place in Rome they showed they are the team for the big occasion by winning another silver. Such success means they will be considered among the medal contenders at the Tokyo 2020 Olympic Games.
Keep an eye on FIVB.com, Facebook, Twitter and Instagram this week as we unveil this year's FIVB World Tour Beach Volleyball Award winners.

The 2018/2019 FIVB Beach Volleyball World Tour began in August 2018 with events in Hungary and France, and Rome, Italy hosted the World Tour Finals last September. Highlights also included the FIVB Beach Volleyball World Championships in Hamburg, Germany, as well as 5-star events in Gstaad, Switzerland and Vienna, Austria and as many as eleven 4-star tournaments around the world.