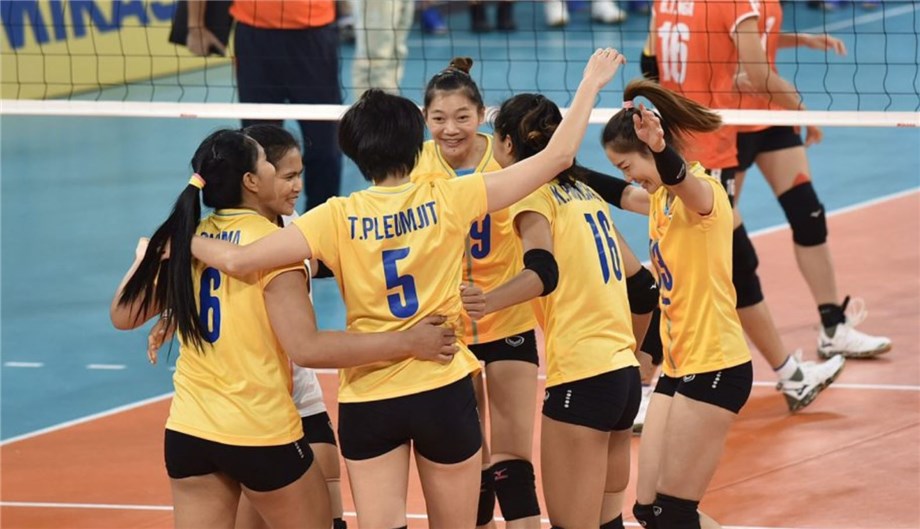 Thailand’s national team cruised to victory at the 2019 SEA Games in the Philippines (Photo: volleyball.or.th)

Manila, Philippines, December 9, 2019 – Reigning champions Thailand defended their Southeast Asian Games title by emerging victorious at the 2019 edition in Manila on Monday. Captain Nootsara Tomkom (THA) and her teammates cruised to an emphatic 3-0 (25-15, 25-15, 25-17) win over Vietnam to secure a 12th consecutive and 14th overall SEA Games crown.
One of Thailand’s most popular and most experienced stars, 36-year-old middle blocker Pleumjit Thinkaow, was happy to join the team’s success.
33-year-old outside spiker Onuma Sittirak was proud to contribute to a memorable victory and pose with a well-deserved gold medal.
Opposite Pimpichaya Kokram, who was also on the court against Vietnam, is only 21 years old, but has already added a third SEA Games gold to her collection.
Although she was not among the starting seven for the final, 24-year-old up-and-coming hitter Ajcharaporn Kongyot was all smiles after the match and posted several pictures with libero Piyanut Pannoy and their medals.
Pannoy herself was quite euphoric, but reminded everyone that the team must reconvene on December 17 to start preparations for January’s Olympic qualifiers.
Despite losing the final, the Vietnamese players were satisfied with a ninth silver medal in the history of the SEA Games. Their prominent captain Tran Thi Thanh Thuy pointed out that her country will host the next edition in 2021 in Hanoi.
The bronze medal match turned out a thrilling five-set rollercoaster, in which Indonesia once again upset hosts the Philippines, this time by 3-2 (25-20, 24-26, 25-15, 20-25, 16-14). The Filipino home crowd in the stands was just as fantastic as it was throughout the tournament and one of the team’s stars, 25-year-old middle blocker Mika Reyes, did not forget to thank them for the support.
The Philippines and Indonesia will play in the men’s final on Tuesday after winning their semifinals on Sunday. The home team persevered through a nail-biting five-set drama to emerge with a 3-2 (17-25, 25-20, 23-25, 27-25, 17-15) victory over Thailand, while Indonesia cruised to a 3-0 (25-19, 25-23, 25-15) win over Myanmar. Tuesday’s gold medal match is set to start at 18:00 local time. Myanmar and Thailand will clash for the bronze at 15:30, after Cambodia and Vietnam settle for the fifth place at 13:00. Singapore finished bottom seventh.
Follow the competition on the Philippines 2019 Southeast Asian Games website.
Quick links - Volleyball:
FIVB.com
Facebook
Twitter
Instagram
Youtube